The Mission Service is a way for API clients to specify high level autonomous behaviors for Spot using behavior trees.

Behavior trees allow clients to specify behaviors as simple as executing a sequence of tasks as well as more complicated behaviors, such as returning the robot to base when the battery is low. Behavior trees are commonly used in AI to define the behavior of non-player characters in video gaming.

Behavior trees consist of structural nodes that control how the tree is parsed, and action nodes, which carry out some action, such as making the robot navigate from place to place or activate a payload.

Each node may have zero or more children. Each child can be thought of as a distinct behavior tree, also called subtrees. For example, you can have a behavior tree that powers the robot on, then stands the robot up. That behavior tree can then be inserted as a child of another node.

Certain action nodes depend on state that might be dynamically created by other nodes in the tree. State is written to and read from a blackboard, a messaging capability that allows nodes to share state in the behavior tree.

For example, the BosdynRobotState action node will read state from the robot, including whether or not motor power is on, and create a blackboard entry with the value of the state. The child of BosdynRobotState (and all of its children’s children) can read that information. Variables in the blackboard are scoped such that only the child of a node that defines a variable can read or write that variable.

If a node A defines a variable “MyVariable” and has a child node B, node B is allowed to also define “MyVariable” in the blackboard. Node B and its children will only be able to interact with Node B’s version of “MyVariable”.

A behavior tree consists of a hierarchy of structural and action nodes.

Structural nodes control the order in which nodes are visited in mission execution or if they are visited at all.

Action nodes take some action, such as making the robot do something or triggering a payload to do something.

All of the node types described above have a corresponding protocol buffer message definition. Each one must be wrapped by a general Node message. For example, here is a single-node mission titled “Just power on” that will power on the robot: 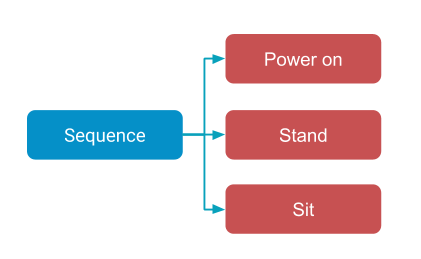 The following Python code snippet implements the simple linear behavior tree shown above using BosdynRobotCommand action nodes, plus the “Just power on” mission from before.

The following behavior tree diagram shows the structure of a mission that repeats a task until either the designated number of iterations are completed or until the robot battery reaches a low-charge threshold.

In this example, the robot stands up and then performs a demo of walking between two locations 10 times, finally going to some location labeled “demo end.” If at any point the battery is below some threshold, or the robot successfully goes to the “demo end” location, the robot will go to a location labeled “Home” and power off.

The root of the tree is a sequence that makes the robot stand, then run the selector node, then perform the “go home and power off” sequence.

First we set up the node that will query the robot state and insert it into the blackboard. Note that state_name is set to “state.” We will use that string in the Condition node.

Now we tell the Condition node to read power_state.locomotion_charge_percentage.value from state, and see if it is less than or equal to 20.

The Condition node must be the child of the BosdynRobotState node, in order for it to read the state out of the blackboard.

The Selector is set to “always restart”, so that it will execute the BosdynRobotState and its Condition node child on every tick. This means that the behavior tree is reading new state from the robot and checking the battery percentage against the latest value.

The MissionService provides RPCs for clients to load and play missions recorded using the GraphNavRecordingService.