Spot uses 3D transformations to describe itself, objects around it, and its understanding of the world. Spot has different frames to represent these objects, such as the “body” frame, which describes Spot’s body. A 3D transformation is then used to describe a relationship between two frames using a translation vector and a rotation quaternion. These transformations can be used to orient Spot in space and determine its location.

These transformations are expressed in 3D space using the x, y, and z axes. A translation is a 3 element vector (x, y, z) describing the difference between two frames’ origins. A rotation is a quaternion (w, x, y, z) that describes the change between two frames’ coordinate axes orientations. In the API geometry, we use an SE3Pose to encapsulate the translation and rotation used for transformations. Similarly, we use strings to describe different frames that can be related to each other using SE3Pose transformations. 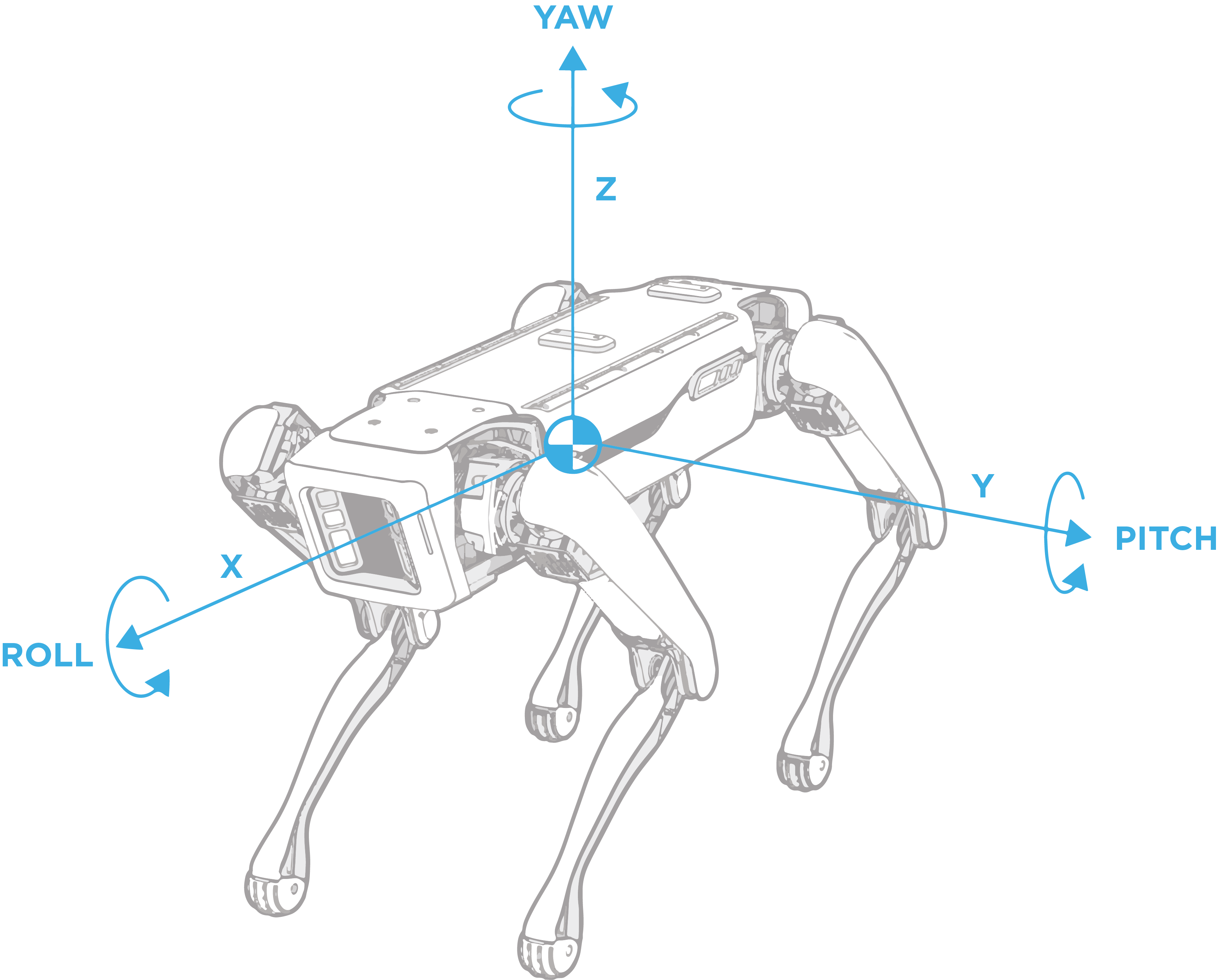 For example, a camera frame origin may be located at the lens of the camera with the Z axis pointed out and the X and Y axes aligned with horizontal/vertical dimensions of the picture. A point at [0, 0, 1m] in the camera frame would be in the center of the lens and 1 meter forward of origin where the camera is pointing. A transformation could be used to describe how to express this camera frame with respect to Spot’s body frame, and the API adopts a notation of body_tform_camera to denote the SE3Pose of this transformation.

Frames in the Spot robot world¶

Generally, you will only need to work with the following frame types: inertial frames, sensor frames, object frames, and the robot’s body frame. However, the robot may also report other frames it has knowledge about.

The inertial frames of Spot are the “vision” frame and the “odom” frame. These frames have an origin and initial rotation matching that of the robot’s body when it boots up.

Sensor frames describe the origin of a given sensor and its coordinate axes. The sensor messages from the robot, such as camera images or point clouds, will include the string frame name of the sensor. Sensor frames are commonly used to describe objects that were detected using the sensor.

Objects can also be described using a frame. For example, a fiducial has an origin in the center of the tag, and x,y axes aligning with the tag axes and the z-axis pointing out of the page.

The following frames are known to Spot:

In the API, other frames not listed above will often be captured by name in the proto definition. Typically, an object will have one or more fields prefixed with “frame_name_” to describe its specific frames, and the transforms associated with these frames can then be found in that object’s transform snapshot. For example, the LocalGrid proto has frame_name_local_grid_data which refers to the position and orientation of the top, left corner of the grid map.

Spot has knowledge about many of the frames mentioned above and how they relate to each other. These relationships between frames can be stored in a graph-like structure, where an edge represents a transformation A_tform_B, and the nodes represent the frames “A” or “B.” The API creates a tree-graph of all the relevant frames, where each frame can uniquely be described relative to a different frame using transformations and all frames are described relative to a single root frame.

Different services provide a snapshot of the transformation tree graph at a given timestamp (which is described in the field acquisition_time), which includes transformations between “vision,” “odom,” and “body” frames in addition to any other relevant frames, such as the sensor frames for images or frames for world objects. All transformations in the snapshot are guaranteed to provide the most accurate SE3Pose for the timestamp.

Other mathematical operations can be computed with an SE3Pose transformation, such as creating a 4x4 matrix, transforming points, or computing roll, pitch, or yaw. The API provides helper functions for these operations, including transformation multiplication and inversion, in math_helpers.py.

Frames can be added by client applications at run time. For example, you can add a frame for an AprilTag fiducial that the robot discovers during operation using the world object service.