To manage the docker images on any other compute payload, please refer to the Command-line Configuration section.

After implementing and testing the application on the development environment, the first step is to create a docker image with the software application and its dependencies. Docker containers are dependent on images and use them to construct a run-time environment and run an application. The instructions to create a docker image are specified in a file, usually named Dockerfile. The Dockerfile specifies what base docker image to start from, what additional software and libraries to install on top of the base image, and what software needs to be run when the container starts. A variety of Spot SDK examples contain a Dockerfile.

An x86/AMD docker image can be built on an x86/AMD development environment using the following commands, where {IMAGE_NAME} represents the desired docker image name.

An ARM docker image can be built on an ARM development environment using the following commands, where {IMAGE_NAME} represents the desired docker image name.

In order to create docker images on the development environment for a different architecture, first run the following commands:

The run command needs to be rerun if the development environment restarts. Then, to build the docker images, we need to pass the --platform argument to the docker build commands shown above.

An ARM docker image can be built on an x86/AMD development environment using the following commands, where {IMAGE_NAME} represents the desired docker image name.

The next step after creating the docker image is to test the container on a local development environment first. To start a docker container and its configured software application, run:

In order to run a docker image created for a different architecture, add the --platform argument to the docker run command. For example, to run an ARM-based docker image on an x86/AMD development environment, run the command:

Extensions are software packages or static files introduced in 3.2 that can be installed or simply uploaded in CORE I/O or Scout platforms.

Configured as software packages, Extensions provide the functionality for external developers to easily install applications onto CORE I/O and Scout platforms. On the CORE I/O, these software packages can integrate a newly-mounted payload with the Spot API, or not be associated with any payload functionality at all, such as uploading data to an AWS bucket.

Extensions can also simply be static files that developers need to upload into CORE I/O or Scout platform. This configuration supports two important use cases:

An Extension is a set of docker images configured with a docker-compose yaml configuration file. Extensions are structured as a tgz file with an .spx file extension and contain the following files:

The manifest.json file is the Extension parameterization file with the following parameters:

The docker-compose.yml file contains instructions for managing the docker images in the Extension. The “docker-compose” tool is an industry standard to support the management of multiple pieces of software packaged together.

Extensions can also include the following files:

Once the files described in the section above are created, they can be packaged into an Extension file by simply tar-ing and zipping them into an spx file. With all the files contained in a folder, run the following command from that folder:

Extensions can be installed from the Extensions page by drag-and-dropping the Extension file onto the “Upload New Extension” subpanel, as shown in the video below:

Extensions can also be installed by clicking the “Choose File” button, and selecting the Extension file manually in the File browser window that opens up.

For the docker container statuses, the values listed above are a direct mapping of the status reported by the docker ps command for the container:

For the full Extension statuses, the values are computed as:

Extensions can be temporarily stopped from running by clicking the Stop button at the top-right corner of the Extension view, as shown in the screenshot below for the battery Extension: 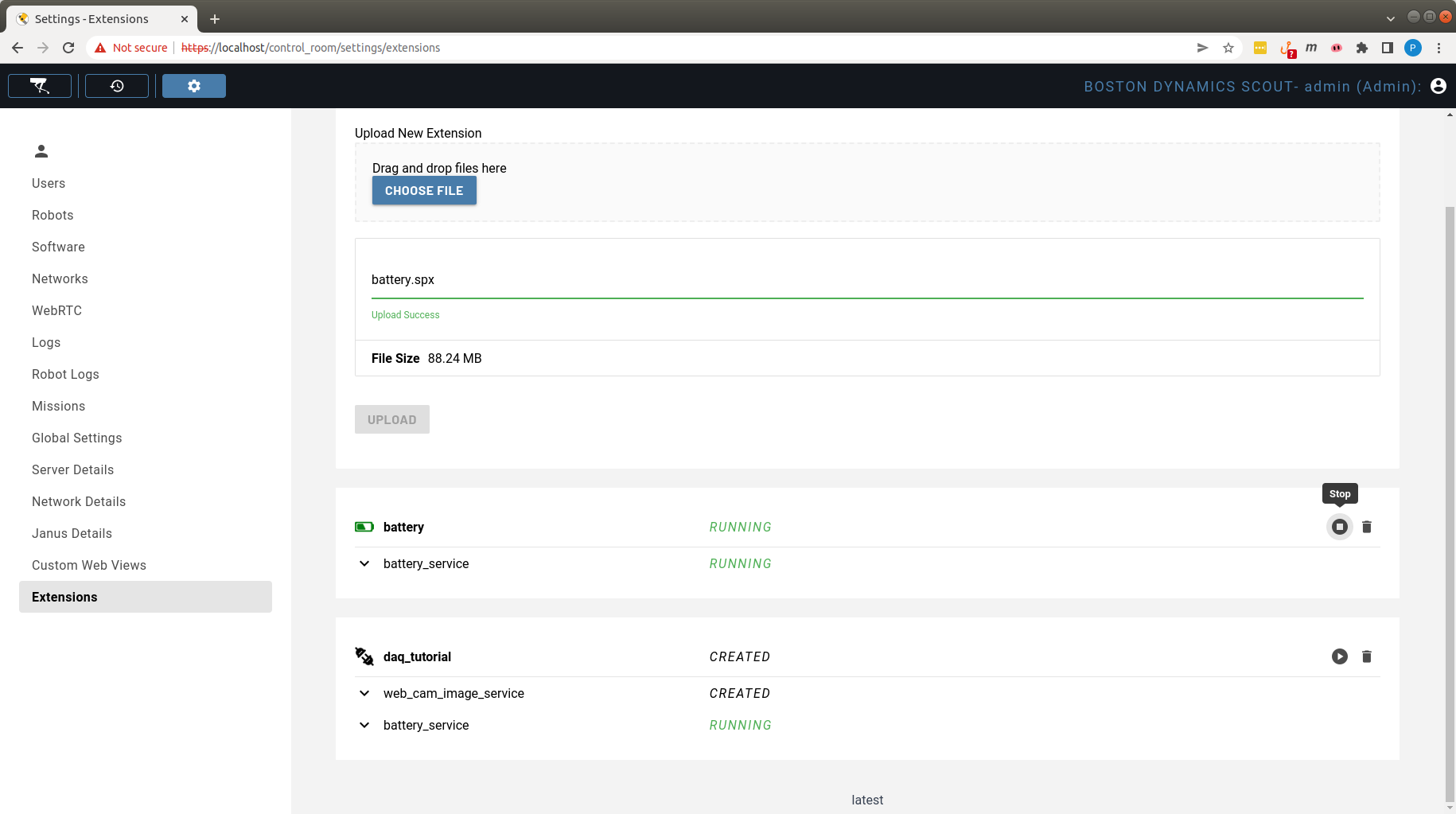 Once the Extension is stopped, the “Stop” button converts to a Start button and the Extension could be manually started by clicking it, as shown in the screenshot below for the battery Extension: 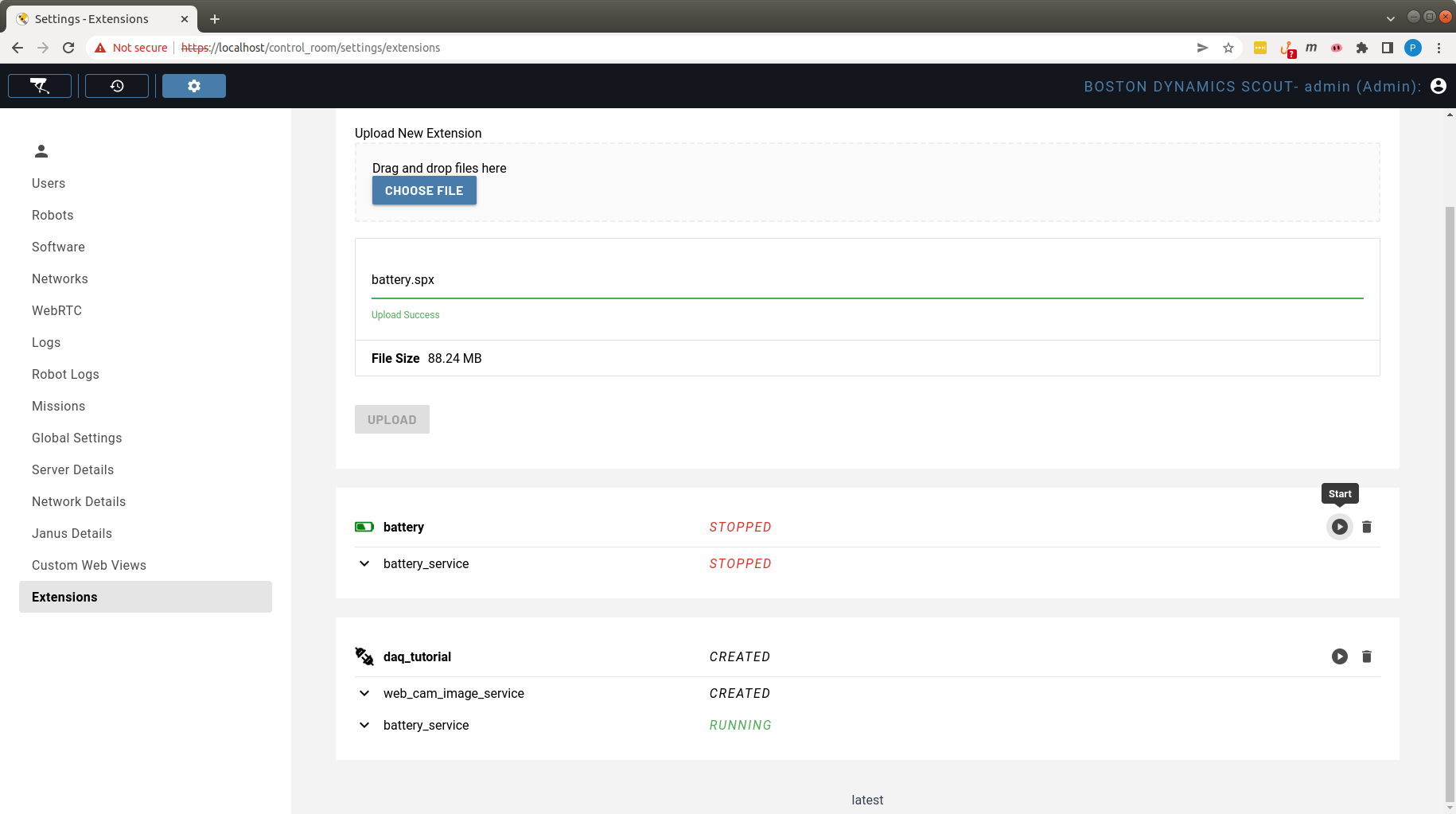 To uninstall and remove an extension, click the “Trash Bin” icon for the Extension, as shown in the video below:

Users can also manage their applications manually on the CORE I/O, or other compute payloads, by ssh-ing into it (ssh -p 20022 192.168.80.3 from the robot’s WiFi) and starting their applications using the options described below. The Extensions functionality included in CORE I/O and Scout platforms simplify the process of managing applications on these platforms, but users can also use the instructions below for debugging and testing purposes.

Users can copy their application to the CORE I/O:

and run them on the command line. python3 is pre-installed in the CORE I/O.

Run Application(s) as a Docker Container¶

Then, ssh onto the computation payload, and load or import the docker file locally. For images created through the single architecture workflow, load the docker image with the command:

For images created with buildx through the multiple architecture workflow, import the docker image with the command below, where {VERSION} is a user specified extension for the image:

To run the docker container and the software application in it, execute:

with the arguments as described in the section Test Docker Images Locally. Note, the host-ip in the example command is currently set for a CORE I/O attached to the rear port and the robot hostname is needed for a service running on the CORE I/O communicating with the on-board software.