The Choreography service is a framework for producing precisely scripted motion, currently focused on dancing.

A choreography sequence consists of a series of moves. We can achieve a wide variety of possible behavior from a moderate list of available moves by:

The choreography framework is much less robust than other Spot behaviors. It should only be used on a flat floor with plenty of space and good traction. Some combinations of moves will be incompatible and will result in the robot falling. The same is true for some combinations of parameters for an individual move. The robot will fall down. It may take some trial-and-error to produce a script that looks good and succeeds reliably.

Not recommended for use with payloads.

We divide time up into slices. In the context of Choreographer, a slice is ¼ beat (also, a 1/16th note for 4/4 music). For example, a dance with a BPM of 100 beats/minute will have 400 slices per minute. The duration of a slice can be adjusted, but must remain constant throughout the entire script.

Note that any number of slices per minute can be selected, very fast or very slow slices will cause some moves to be unreliable. Many moves will be most reliable in the range of 250-450 slices per minute.

We divide the robot’s motion into three distinct tracks:

Each dance move requires one or more of these tracks. Moves that use different tracks can be run simultaneously in any combination. In Choreographer, a track is represented as a horizontal section in the timeline view. For example, here is a screenshot from Choreographer of a script that combines moves in all three tracks:

Some moves require multiple tracks such as in this example:

The various kneel moves require the legs and body tracks, while the stand_to_kneel move requires all three tracks, and cannot be run simultaneously with any other moves.

All moves that use the legs track will have logical entry and exit positions that the body must be in before/after the move. This is to prevent non-sensical choreographies; for example, completing a kneel-to-stand transition if you are not kneeling, or going directly from a step move to a kneeling-clap move without a stand-to-knee transition in between.

All subsequent legs-track moves must have an entry state that corresponds to the previous legs-track move’s exit state. Scripts that violate this requirement will be rejected by the API and return warnings indicating which moves violate the entry/exit states. As well, routines made in Choreographer will highlight moves red when the entry state does not match the previous leg move’s exit state, such as in this example: 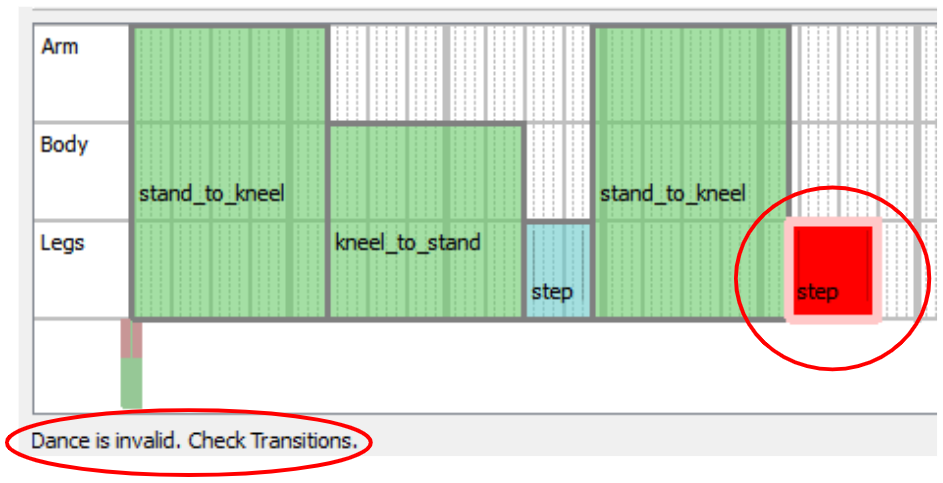 The API defines a choreography sequence by a unique name, the number of slices per minute, and a repeated list of moves. Each move consists of the move’s type, its starting slice, duration (in slices), and the actual parameters (MoveParams proto message). The MoveParams message describe how the robot should behave during each move. For example, a move parameter could specify positions for the body. Each parameter may have specific limits/bounds that are described by the MoveInfo proto; this information can be found using the ListAllMoves RPC.

The service will return a list of warnings and failures related to the uploaded choreography sequence. A failure is something the choreography service could not automatically correct and must be fixed before the routine can be executed. A warning is something that could be automatically corrected for and won’t block the execution of the routine in certain scenarios. If the boolean non_strict_parsing is set to true in the UploadChoreography RPC, then the service will fix any correctable errors within the routine (ex. rounding down values the maximum allowed value) and allow a choreography sequence with warnings to be completed.

The upload_choreographed_sequence example demonstrates how to read an existing routine from a saved text file, upload it to the robot, and then execute the uploaded choreography.

There are two config files that describe the individual moves that are used by the Choreographer to compose different choreography sequences.

The MoveInfoConfig can be parsed by a protobuf parser into each moves field of the ListAllMovesResponse proto. Each MoveInfo proto provides metadata about a particular move. The fields and their meanings are:

The MoveParamsConfig file gives the default value for each of the parameters associated with individual moves. For moves that contain numerical parameters (e.g. double, int32), the config file will also specify the minimum and maximum values.

The config file is formatted as follows. There will be a block of text separated by empty lines for each available move.

The first line of each block will have two values:

The remaining lines describe the default (and possibly min/max) values for one parameter per line. The first field in each of these lines will be the name of the parameter. Dots (“.”) indicate a level of hierarchy within the proto. For parameters that are of type bool or Enum, there will be two fields in the line, and the second field will be the default value. For parameters that are of type double or int32, there will be 4 fields in the following order:

Default values are used if no value is specified within the proto. Values outside of the allowable range will ordinarily result in the script being rejected. However, if non_strict_parsing is enabled, the value will be forced into the required range and a warning will be thrown.