All applications speak to Spot’s API over a network connection. Understanding networking protocols is critical to debugging issues and creating a robust, high-performant application.

Spot offers a variety of networking options to support a diverse set of applications and environments. Options include:

While the application-layer protocol for the Spot API works across any IP-based network connection, the examples above show that networking choice can have a significant impact on the performance and reliability of an application as well as deployment strategies.

gRPC is the application-level protocol used by the majority of the Spot API. gRPC was chosen because it provides a secure, performant protocol with support for a broad set of programming languages and environments.

gRPC specifies the service interfaces and remote procedure calls (RPCs) supported by the service. For example, the Spot API has an authentication service with the following definition:

The service interface’s name is AuthService. It only supports a single RPC named GetAuthToken, which checks the passed in username and password and returns a session token if they are valid.

Protocol Buffer messages are defined using a language independent format, with automatically generated serialization/deserialization bindings for languages. For example, the definition for GetAuthTokenRequest can be seen below (or in auth.proto):

Although the AuthService example shows the common RPC paradigm of single request/single response, gRPC also supports more advanced RPC paradigms such as streaming requests, streaming responses, or full bidirectional streaming. The Spot API uses some of the more advanced paradigms in select locations. For example, gRPC limits responses to 4MB by default, which is too small for large amounts of data, such as the complete GraphNav map. The GraphNav service’s upload and download requests provides a streaming response RPC to work around this limitation.

The Python library included in the SDK hides the use of gRPC and Protocol Buffers and provides a simpler abstraction. For example, the AuthClient class, which speaks to the AuthService interface described above, has a method called auth demonstrated below.

This method takes username, password, and app_token strings and generates a GetAuthTokenRequest message from those using _build_auth_request. The RPC is then sent to the AuthService and a GetAuthTokenResponse is received. If the authentication attempt is valid, the session token is returned to the caller of the auth function. If there were networking issues or the username/password combination was invalid, an exception is raised.

This layer of abstraction simplifies common use cases, but developers will occasionally need to interact with Protocol Buffer messages directly, even when using the Python library. For example, the RobotState message includes many nested sub-messages and detailed information. Rather than convert into primitive types or other data structures, developers need to directly operate on the protocol buffer itself. The message definition and comments in protos/bosdyn/api/robot_state.proto are key to understanding what is included and how to interpret the data.

Developers who wish to support another language or environment are also able to build client libraries using the gRPC service definitions and Protocol Buffer message definitions. The Python client library may also be used as a reference implementation.

Robust applications need to handle errors when communicating with the Spot API. There are three general classes of errors:

More detail can be seen in the GetAuthTokenResponse Protocol Buffer message below:

The networking errors are not defined in the message and happen lower in the gRPC stack. The Specific RPC errors are handled by the Status enum shown above. Throughout the API, the Status enum follows the pattern of 0 being undefined (due to how Protocol Buffers represent unset data), 1 representing an OK or success response, and 2+ representing error codes specific to the RPC. For example, STATUS_TEMPORARILY_LOCKED_OUT is used if there have been too many password attempts for a user and the account is locked out for a short period.

Common RPC errors such as invalid input are not directly shown above. A case of invalid input would be a GetAuthTokenRequest which includes no username or password at all, which indicates buggy client code rather than bad user input. Common RPC errors are shown in the ResponseHeader message below which all Spot API responses include:

gRPC is built on top of other networking protocols, as shown in the diagram below. 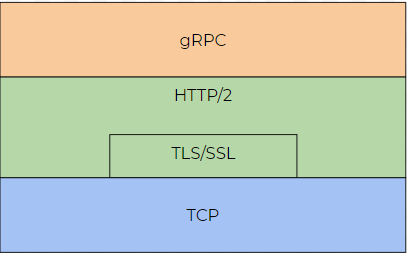 This protocol stack has a few implications:

To talk to Spot, a client application needs to specify an IP address where a Spot is running. There are a number of possible options for doing this sort of robot discovery.

Client applications do not use the symbolic name of the robot (if any) when verifying the certificate during the TLS handshake to the robot. This supports a variety of discovery mechanisms without requiring new certificates to be provisioned.