In addition to identifying ownership, the lease system is used to confirm that a robot is still being controlled and that there are valid communications to the owner. If an owner can no longer be reached within a certain period of time, the lease will become “stale” and may be acquired by another client. If the owner returns to valid communications before another client acquires, the lease will become “fresh” again.

Services which command or control the robot require a lease. These services will reject incoming requests which are from non-owners or contain older ownership information. Ownership semantics provides additional safety to operation workflows by preventing accidental commands from disturbing the current owner’s application. Note, some services will only read information from the robot, and do not require a lease (e.g. image service or robot-state service).

Applications which want to control the robot will begin by acquiring a lease to the robot. A lease can be acquired with the AcquireLease RPC when it has no existing owner.

When issuing robot commands, the robot will be sent a version of the lease with the specific command to permit the robot to complete the desired command. This lease will automatically be included with the command request when using the SDK

When a command is sent including a lease, the service checks the following things before accepting the command:

The service will then respond to the command with a LeaseUseResult proto that indicates whether the incoming lease passed the checks and includes additional information to aid in debugging.

When a command with a lease fails with a lease error, the status within the lease use result provides the root-cause of the failure. In addition to the status, the LeaseUseResult proto contains information about the current lease owner of the incoming lease’s resource, the most recent lease known to the system for the incoming lease’s resource, the latest leases for each leaf resource (since these can be different depending on the types of commands sent). This information can be used to react to the lease failure within the client application.

A lease can claim ownership of the entire robot or specific resources. The “body” resource describes ownership of the entire robot, and can be broken down into sub-resources for the arm, gripper, and mobility (controlling only the legs), as shown in the image below. In most use cases, an application simply needs to send the “body” lease and the robot will determine which specific resources it needs for the command being issued. 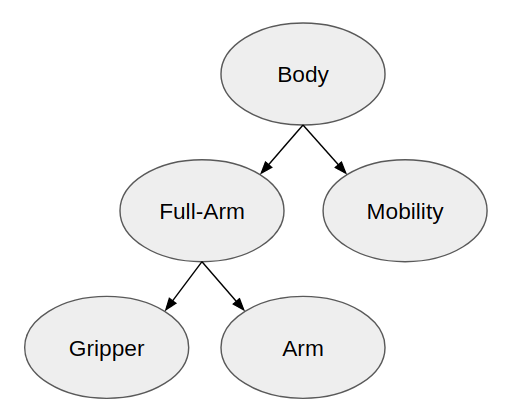 The different robot resources create a tree-structured hierarchy such that the client can control a subset of the robot or the entire robot without needing to manage individual resources. Owning a lease with a parent resource represents control over the entire subtree.

Typically, the lease and ownership can be gained using the AcquireLease RPC> If the lease is actively being owned, the TakeLease RPC provides an alternative that will forcefully take ownership of the lease resources to give control to the application issuing the RPC. This should only be used expressly by a human who is aware of what they’re taking control from.

When issuing a specific command which requires a lease, the robot should be sent a sub-lease of the main, acquired lease. This delegates the ownership of that lease’s resources to the particular service being sent the command. Note, the creation of a sub-lease for a specific command is done automatically by the client library. Commands which require a lease will respond with LeaseUseResult protos, which reflect whether or not the lease provides proper ownership of the robot.

Additionally, clients should simply send the “body” lease and the robot service’s will split the lease into only the necessary parts. This allows clients to issue multiple commands which control different resources (e.x. a gripper command and a body trajectory command) without worrying about breaking apart a lease themselves. Clients can split leases into sub-resources, but will need to be careful to preserve the sequence number.

A lease contains the resource which it controls ownership, a sequence, an epoch, and set of client names.

The sequence is a list of integer numbers which indicates when the lease was generated and if it is a sub-lease. The first number in the sequence is the root lease number, and is generated by the base lease service. Sequence numbers are incremented when creating new leases. Additional sequence numbers can be appended to the lease sequence when creating a sub-lease to delegate ownership to a specific service. For example, the lease sequence lease=[3, 1] has a root lease number of 3, and a single sub-lease with value 1.

Resource ownership is determined by whichever lease has the highest root lease number. For example, when comparing leaseA = [6, 1] and leaseB = [5, 13], leaseA is considered newer and the current owner.

In addition to ownership, the lease sequences are used by services to determine which command should be executing currently. Services will use and execute whichever command shows ownership of the necessary resources and has the newest lease sequence. To compare leases, the sequence number with the first higher number is considered the newest lease. For example, when comparing leaseA = [1, 2, 10] and leaseB = [1, 2, 11], leaseB is considered newer since the second sequence number is higher in leaseB than in leaseA.

The epoch is used to create a scope for the sequence field, such that only leases with the same epoch can be compared. The client names are a list of each client which has held the lease; these can be helpful for debugging to see which services were delegated ownership and created sub-leases.

Consider the example below.