This section describes how to develop and deploy applications on the CORE I/O and monitor its status.

The root filesystem does have an optional temporary overlay that allows for writing and modifying files, but any changes made to the root filesystem are erased on the next boot. To enable this, run sudo touch /persist/.enable_overlayroot and reboot the system. To disable this overlay, run the command sudo rm /persist/.enable_overlayroot and reboot the system.

When attached to a robot, the CORE I/O web server will authenticate against the robot it’s attached to with the provided username and password. This will typically be the password printed in the battery compartment of the robot.

To disable authentication for the web server (needed if the payload is not attached to a robot), SSH to the CORE I/O (enter the password provided with the payload when prompted) and create the “skipAuth” file, then restart the web server:

Disabling authentication will not persist across boots.

How to connect via SSH¶

If the payload is on a benchtop (e.g. not on a robot), connect the client device to one of the ethernet ports on the payload and set the connected device’s IP address to be on the same subnet (192.168.50.0/24), then run:

If the payload is on a robot, connect the client device to the robot’s network and run:

How to connect via local terminal with monitor and keyboard¶

We recommend connecting to the payload through SSH, but if necessary, the payload provides a USB-C port and two USB-A ports for connecting a monitor and keyboard. To connect a monitor, use a USB-C to HDMI or USB-C to Displayport adapter. Desktop mode allows CORE I/O to be used without attaching to Spot. To use the payload in desktop mode, connect a 48V power adapter (not included in packaging). When operating the payload in desktop mode, the only available interface is a terminal. Graphical elements have been removed from the software to optimize for other use-cases.

Network configuration on the CORE I/O is done using NetworkManager. By default, the payload has in IPv4 address of 192.168.50.5/24 on its ethernet interface, which connects to an onboard switch that also connects to the robot via the payload port. The IP address can be changed from the command line using the nmcli tool (https://developer-old.gnome.org/NetworkManager/stable/nmcli.html). If network settings are changed via a different interface (e.g. ip or ifconfig), the settings will not persist across reboots.

To connect to a wifi network with a connected USB Wifi dongle:

By default, the CORE I/O runs a set of software provided by Boston Dynamics. This includes the following:

Developing on the CORE I/O¶

Due to the read-only filesystem, direct development on the CORE I/O is not recommended. Installing dependencies using apt and pip will not work correctly and even if they do, that environment is removed on the next boot.

Instead, we recommend developing on a dedicated development machine and install the end product application to the CORE I/O as Docker images configured in an Extension. See Running Custom Applications with Spot for more information.

If development needs to be done on the payload itself, we recommend developing in an environment created with a Docker container. All dependencies needed for development can be pre-installed in a docker image (or installed after the container is running). Devices, files, and networking can also be supplied to a container by using the --device, --volume, and -p flags for docker run. For more information, see Docker run reference.

As an example, the follow command can be used to create a development Docker container (the payload will need internet access, or else the arm64v8/python:3.8-slim image needs to imported first):

This creates a detached Docker container with the /data directory mounted. To connect to it, run:

You now have an environment where you can install additional dependencies using apt and pip and can execute Python code.

GPIO stands for general purpose input/output. The CORE I/O comes with 3 pins a developer can utilize for these general purposes. They can be setup in software as a signal output of 3.3v, a logic level input reading pin (note there are not internal pull-up resistors), or a pwm (pulse-width modulation) output signal. The CORE I/O also provides pins that provide power out at 5V, 12V, and 24V. There are also 2 pins providing i2c communication SDA (data) and SCL (clock). 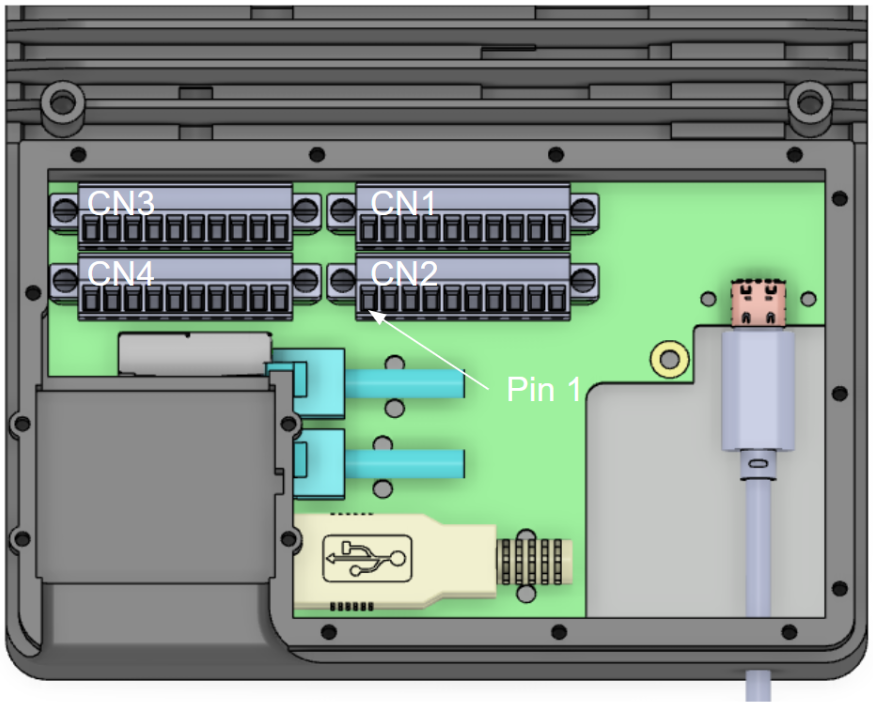 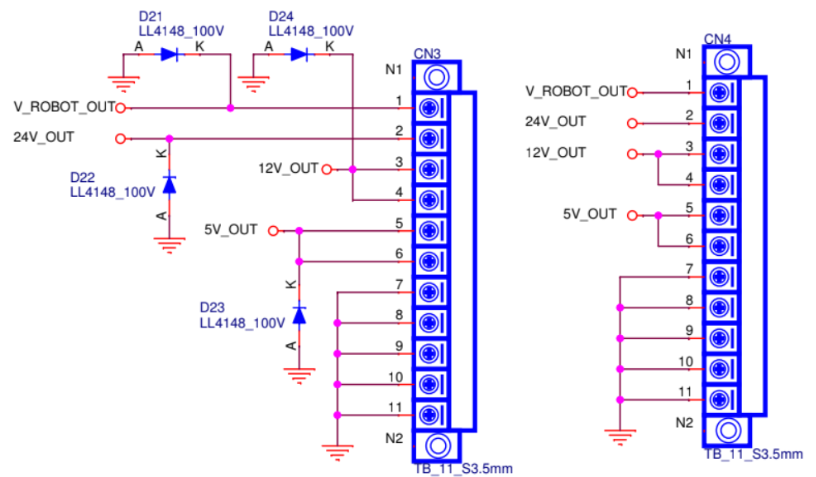 The easiest way to control the voltage output pins in CN3 and CN4 is through the GPIO page in the web server. At this time, PWM control has not yet been built into the web server.

* Turning off GPIO pins while the payload is in operation may also adversely affect functionality. For example, turning off the 12V pin will cut power to an attached lidar and will inhibit Autowalk from working. The service serving LIDAR data to the robot also automatically turns on the 12V pin. If the 12V pin needs to be turned off, the lidar service must be disabled.

The following are the electrical specifications for the GPIO ports:

Scripts have also been provided as part of the base CORE I/O software that can be referenced when working with GPIO and PWM from another program:

Note: All voltage output pins (CN3 and CN4) are turned on when the CORE I/O boots up. On/off settings set via the web server or helper script do not persist across reboots or updates. Turning off GPIO pins while the payload is in operation may also adversely affect functionality. For example, turning off the 12V pin will cut power to an attached lidar and will inhibit Autowalk from working. The service serving LIDAR data to the robot also automatically turns on the 12V pin. If the 12V pin needs to be turned off, the lidar service must be disabled.

Working with other devices (e.g. USB devices, SD cards, etc.) is similar. The corresponding devices and volumes simply need to be mounted into the container.

i2c is a serial communication protocol that can be used to daisy chain many devices (provided they have different addresses) to a single bus. Communication happens across 2 pins SCL and SDA (clock and data) and chip power and ground are also required, 4 wires total for dozens of sensors and devices.

Once the device is connected to SDA, SCL, 3.3v, and GND it can be seen on the i2c bus #1 by using this shell command:

The table shows there is a device on bus 1 at address 0x6D To read individual registers on the device, run the following command:

The CORE I/O has an NVIDIA Xavier NX, which has an NVIDIA Volta architecture GPU with 384 NVIDIA CUDA® cores. The GPU can be used for running ML models and examples for running ML models as Spot Extensions are provided as a part of the Spot SDK. The GPU can be used by multiple processes (and multiple Extensions), but performance may not be optimal.