We sometimes want the robot to execute a sequence of actions anytime the robot is at the certain location in the map. That is where we can use Area Callbacks. An Area Callback allows the user to associate certain areas with specified actions, such as safety checks at the crosswalks, opening doors, and signaling the environment using lights and sounds.

Below is an example that does the following:

Let’s take a look at the example to see how that can be done. We will go over some of the important lines in the area_callback_crosswalk.py example.

Below two lines lets the user to specify the area callback policy at the start and the end of the region.

These policies determine the type of behavior that robot will be executing at the start and the end of the area callback region. Available policies are listed below:

Below is an example for initiating the thread for Spot CAM LED lights. We have provided the LightsHelper class that can be used to run different lighting modes for when the robot is waiting to cross the road versus when the robot is crossing the road. This helper is a context manager that will run a separate thread to control the lights while the main thread continues inside the context.

We are not using any configurations yet, but this is the place where you will be unpacking user input parameters. TBD.

self.block_until_arrived_at_start() allows the code to stop running until the robot reaches the starting location of the area callback region.

Now that the robot has reached the start location, start the light mode for waiting.

Below is a placeholder pseudocode for where you would insert your ML forklift detection model. Here, you want to place a function inside the with statement that will exit when the road is clear of the forklift so that the robot can proceed to navigate the crosswalk.

Once you are clear of the forklift, self.continue_past_start() allows the robot to move past the starting location of the area callback region. In short, self.continue_past_start() overrides the self.stop_at_start() policy that was set in the initialization step. Once again, you may want to include any actions that robot should execute after the robot reaches the start and before crossing the Area callback region between self.block_until_arrived_at_start() and this line of code - such as checking for the forklift. As shown below, the example starts the Spot CAM light for crossing the road.

To finish the callback, simply return from the callback’s run() method. This callback does not have any cleanup beyond that which is already handled in the LightsHelper context manager.

This tutorial will run the area callback server on your laptop. We will use “fake” client code so that you can run your example before the full graph-nav integrated solution is ready. This tutorial assumes that you have your environment set up for the sdk examples to run. Please refer to this guide for more information on setting up your environment using the sdk.

Step 0. Turn on the robot, and have it sitting next to you with motors off. Step 1. On your computer, get into the virtual environment that contains sdk package installation & connect to the robot. If you connect via the robot’s wifi, its ip address will be 192.168.80.3. Step 2. Open a port for the robot to communication with the service:

Step 3. In the SDK_DIR/python/examples/area_callback, launch the crosswalk servicer by running

Step 4. (Optional) If your callback requires control of the robot, in a second terminal, in the SDK_DIR/python/examples/estop/, run

Step 5. In a final terminal, in the SDK_DIR/python/examples/area_callback, launch the crosswalk test program by running

To clean up the firewall port rule, use

For this example, you can either run the area callback client code on your laptop, or on the Spot CORE or CORE I/O.

If you are to run this example on your laptop, you need to have at least release 3.2 installed on your laptop. Once installed on your system (or virtual environment), connect to robot’s wifi, then run the callback client code using steps 1-3 above. We recommend that you run your example this way before dockerizing the custom area callback and loading it onto the Spot CORE or CORE I/O.

For Spot CORE or CORE I/O, it is recommended that you dockerize your customized area callback code. The Dockerfile example is included in the look_both_ways and crosswalk_lights folder.

We will use the graph nav as the client, using the map you recorded using the tablet. Adding a area callback region / action works the same way as adding remote mission callback service. During an autowalk, press the red plus button on the bottom right corner of the recording screen. 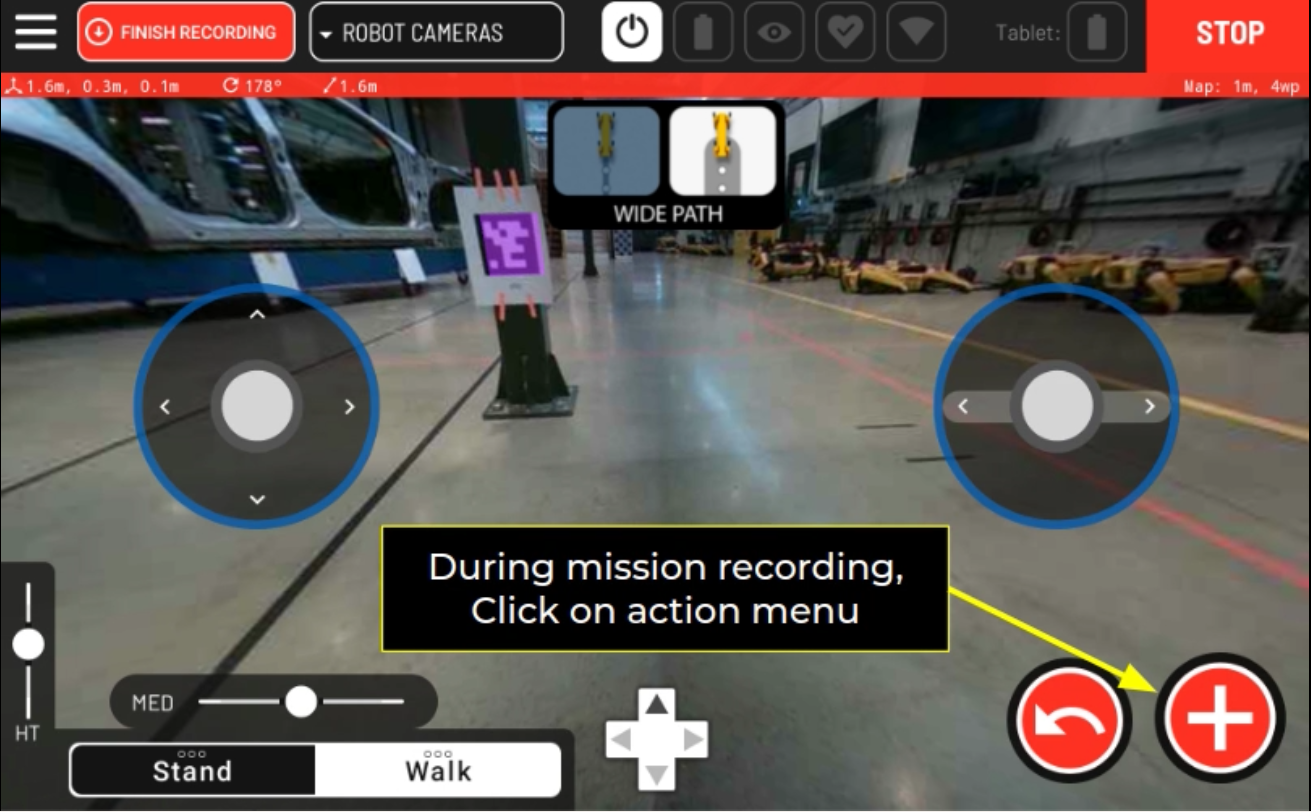 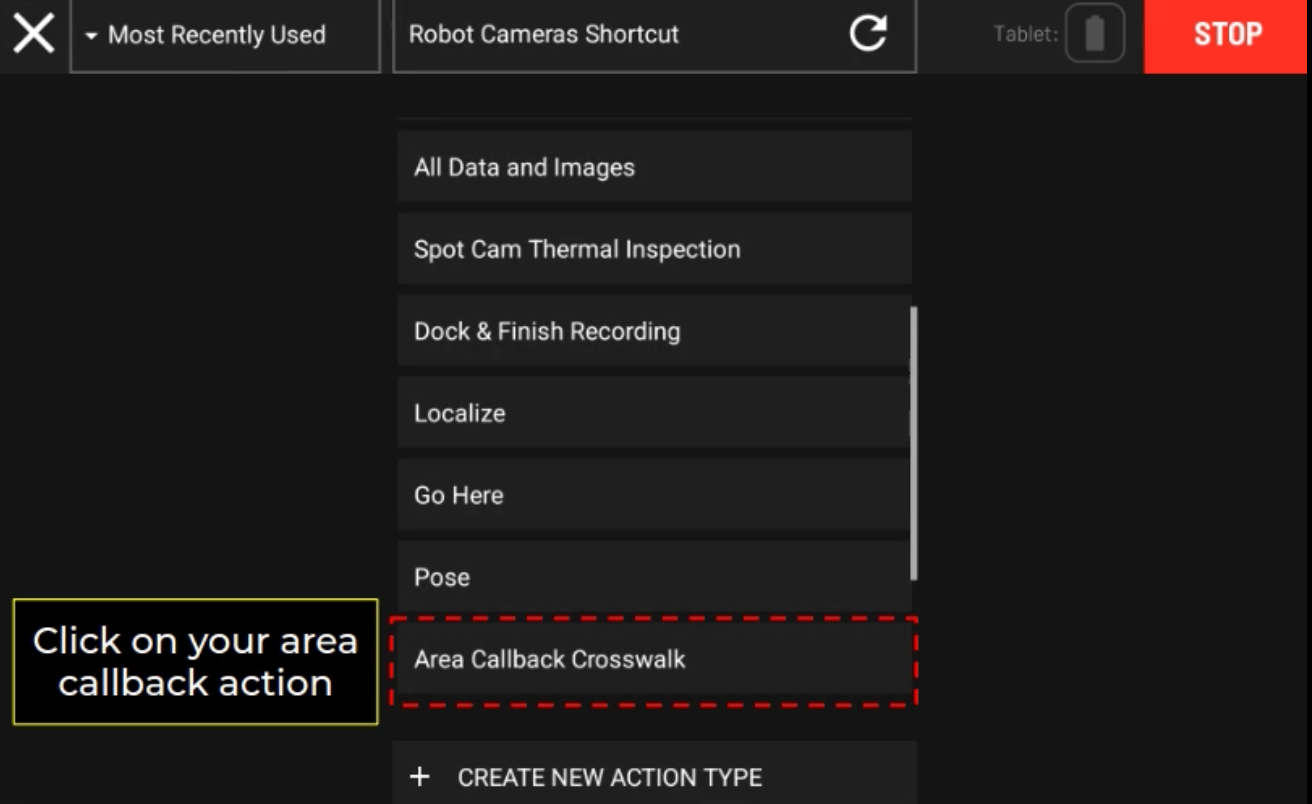 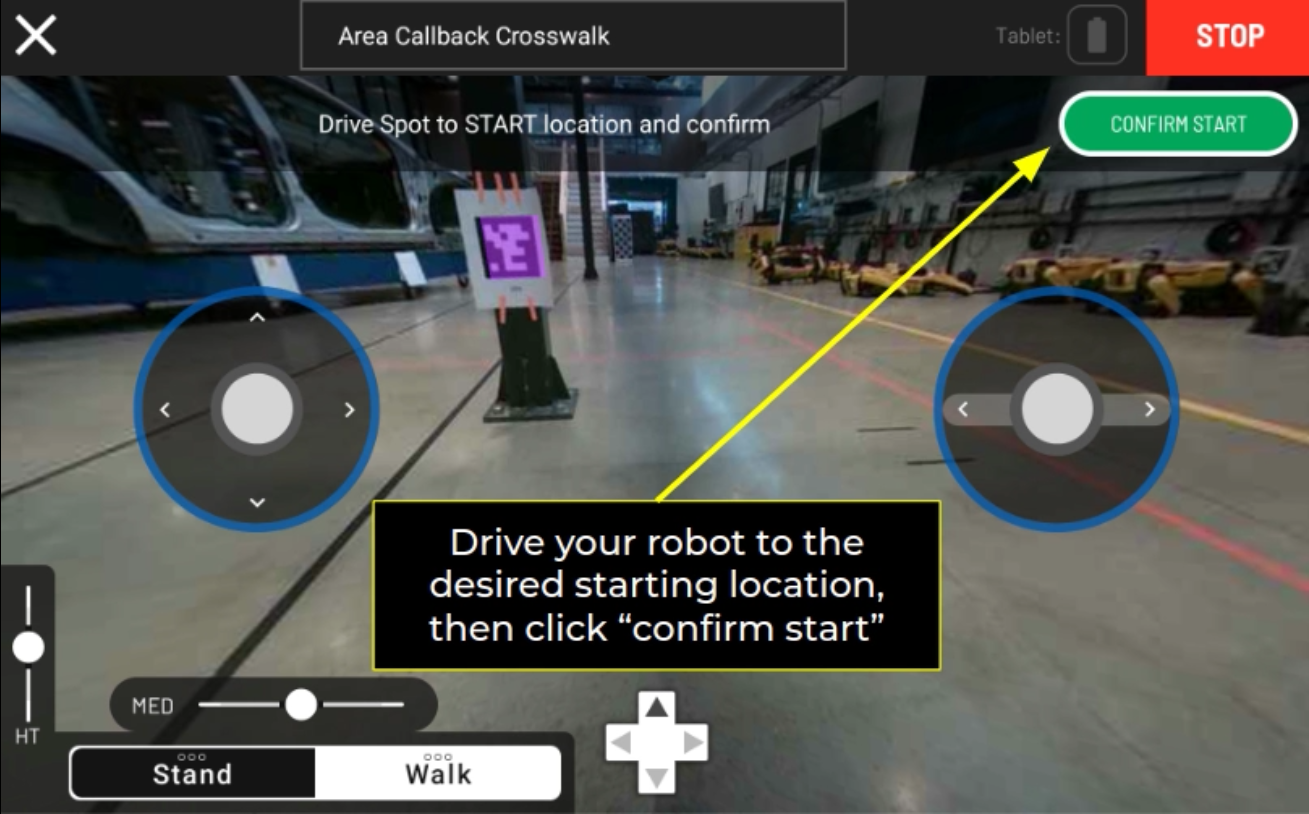 Then, walk your robot to the end location of your area callback region. Then, press Confirm End. 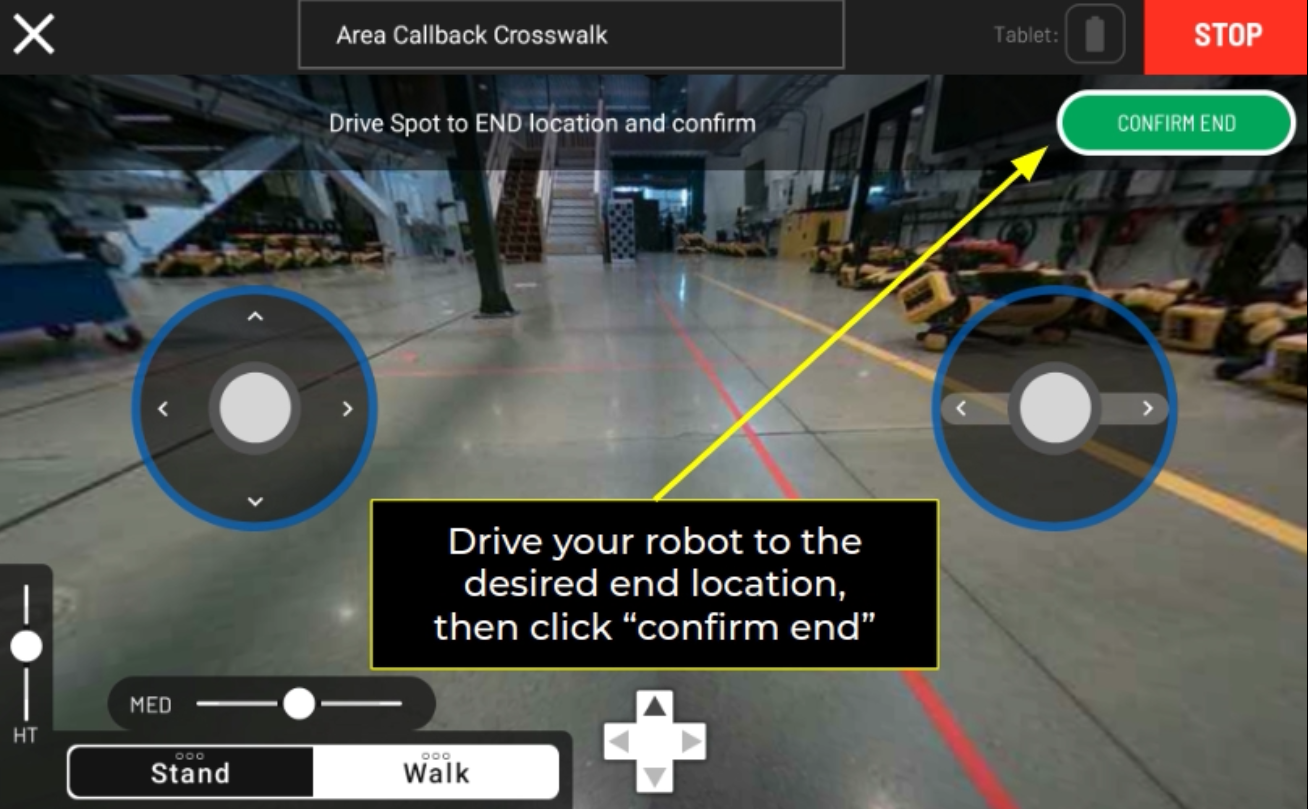 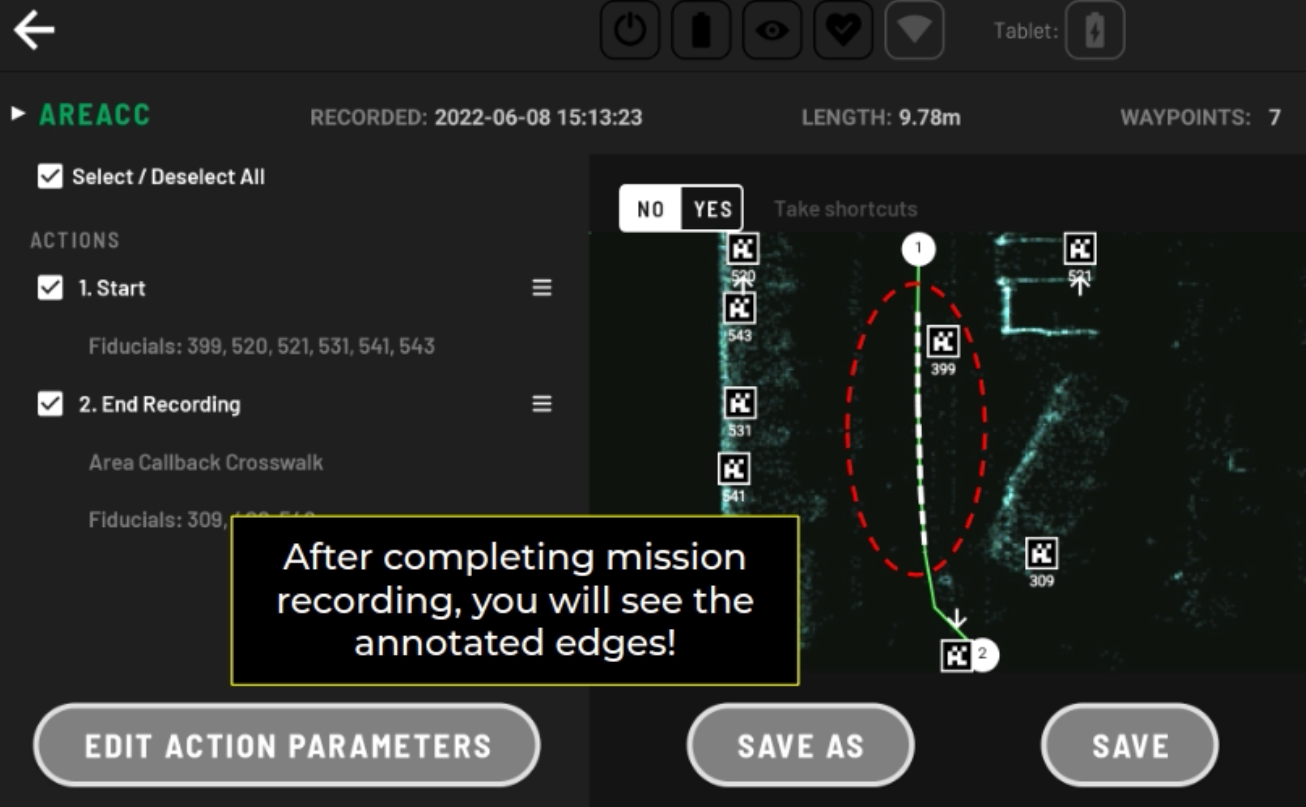