Cockpit is an interactive Linux server admin interface, licensed under: GNU LGPL version 2.1. More details can be found at https://cockpit-project.org/.

We have installed this tool on the Spot CORE to make system management a little bit easier for developers and end users.

This document will quickly cover the recommended features for Spot CORE users. Cockpit is readily available on forwarded port 21443. In the future, a direct link will be provided on the Admin Console Spot CORE Payloads page. Since 2.1.0, to access this port through the robot, use the following address: https://INSERT_ROBOT_IP:21443/. If a PC is connected to the robot over WiFi, go to https://192.168.80.3:21443/. Click “Advanced” and “Proceed …” to reach the login page. 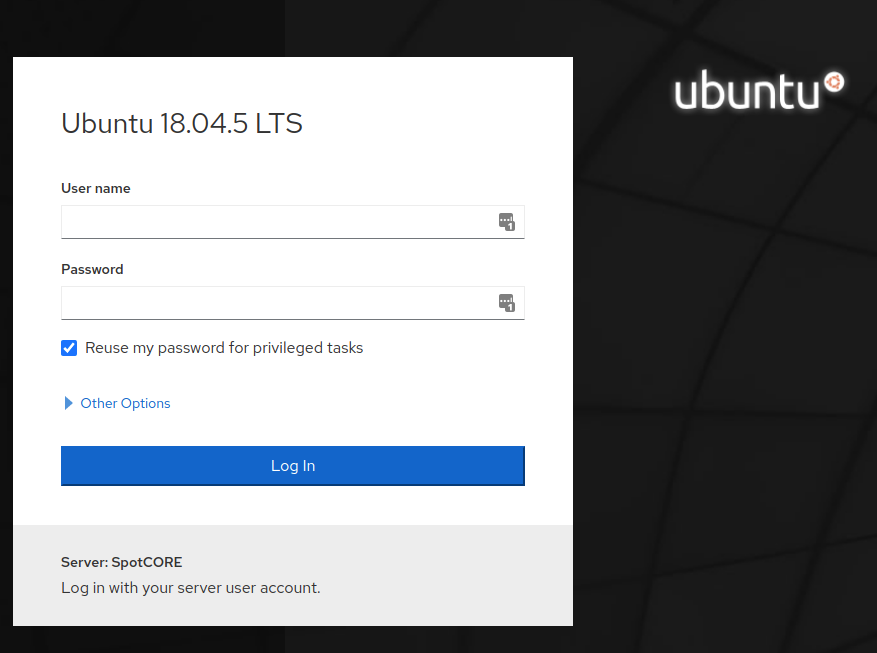 The landing page gives you an “Overview” of the Spot CORE. Notice near the top right corner there is a “Restart” option which is very handy if the Spot CORE is in a remote location. IMPORTANT NOTE: Do not adjust system time if you are using the Spot CORE EAP with the Velodyne LiDAR VLP-16. 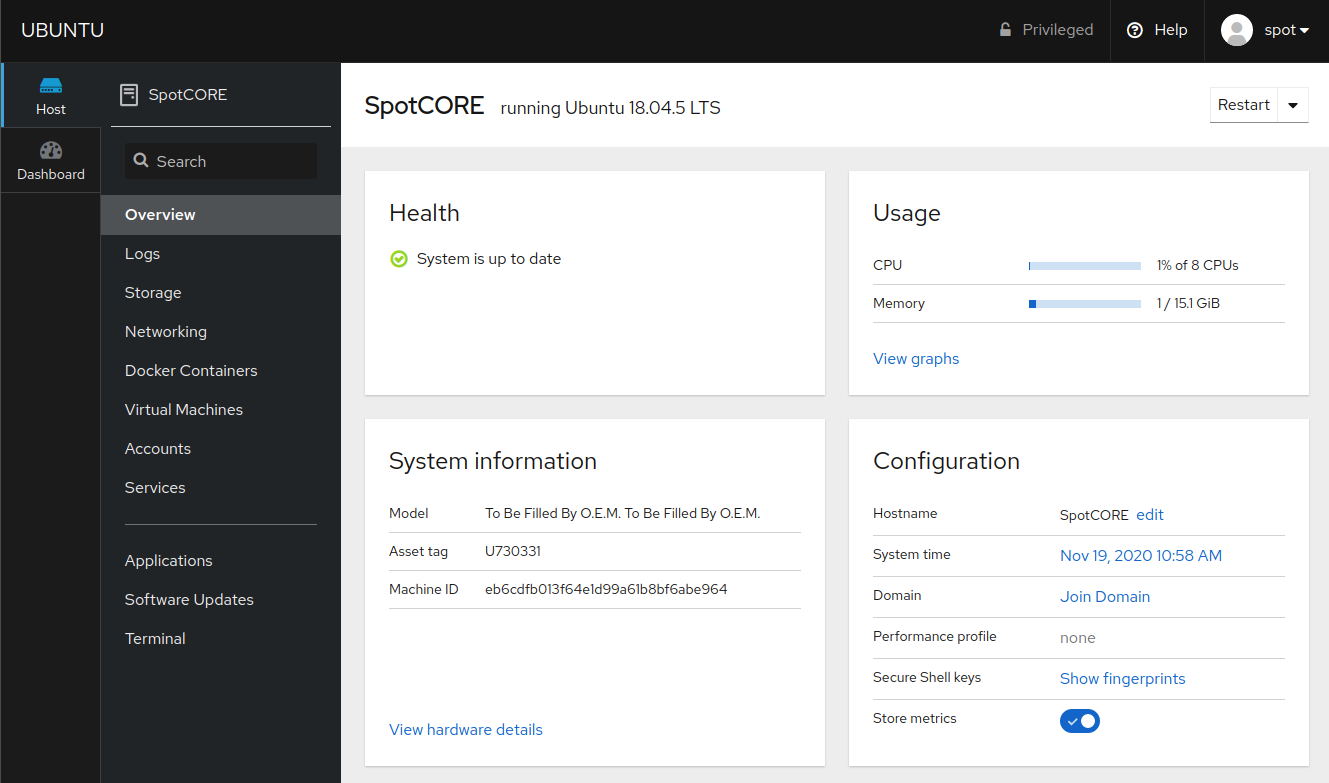 See additional instructions below to specifically cover how to use the following tools with the Spot CORE.

Jumping down to the bottom option, take a quick look at the Cockpit Terminal page which will be used in the following examples. 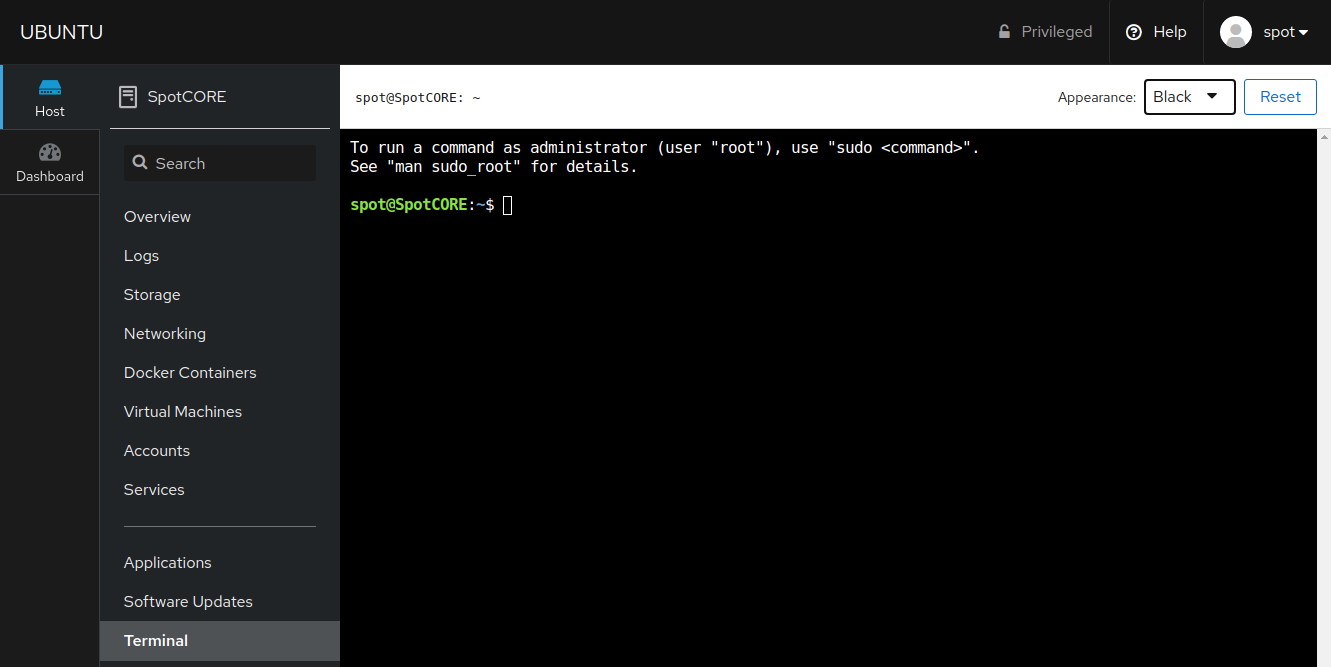 Our support team may ask you what Spot CORE version you are running. This information can be found on the registered payload page of the admin console or the settings page of the tablet app. This information can also be found with more detail by running the following command on the Spot CORE. An example is included below using the Cockpit Terminal.

The Networking page will likely be the most frequently used interface for Spot CORE users. The default base image for the release 2.1.0 or later Spot CORE now uses NetworkManager for configuring network settings which provides a clean interface with Cockpit. 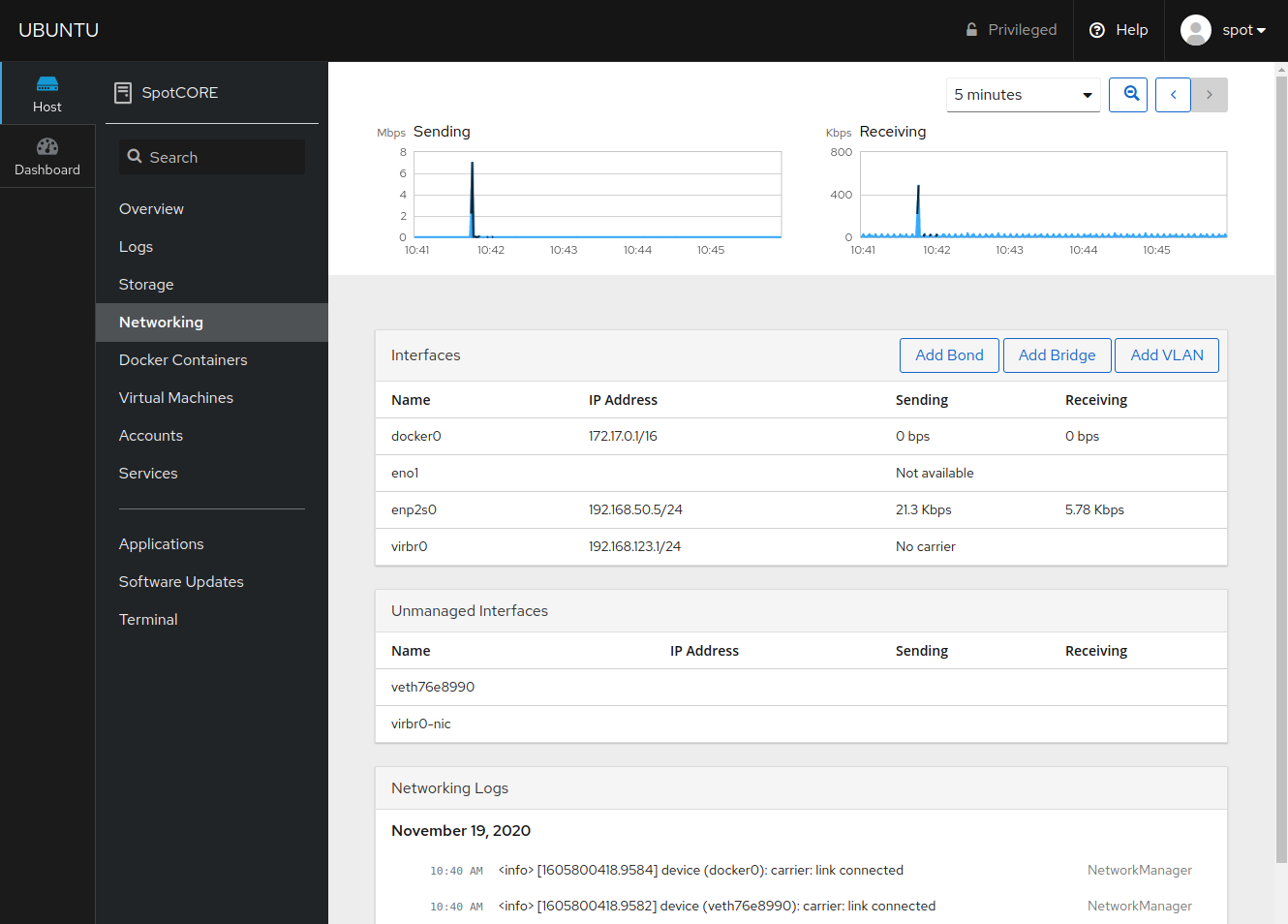 Below is the recommended procedure for release 2.1.0 or later of how to connect Spot CORE to the internet with a WiFi adapter.

Insert a USB WiFi adapter into the Spot CORE and notice the device appears as an additional interface. If the WiFi adapter does not appear, it is possible the adapter does not support the default Linux Kernel 4.15 shipped with Ubuntu 18.04. Use a different adapter or install a driver update.

The next step is to connect the WiFi adapter to a wireless access point. There are a couple methods to perform this task, but we recommend using the Cockpit Terminal as this will be the fastest. Please note, connecting to a wireless access point can also be achieved using SSH, VNC, or the standard desktop environment with a monitor, keyboard, and mouse plugged into the Spot CORE.

Return to the Cockpit Terminal and use the condensed instructions included below or follow the detailed instructions here to configure your WiFi adapter from the terminal.

From the listed wireless access points, replace the captilized letters of the command below with your desired WiFi network and password.

Included below is an example of running the above commands. 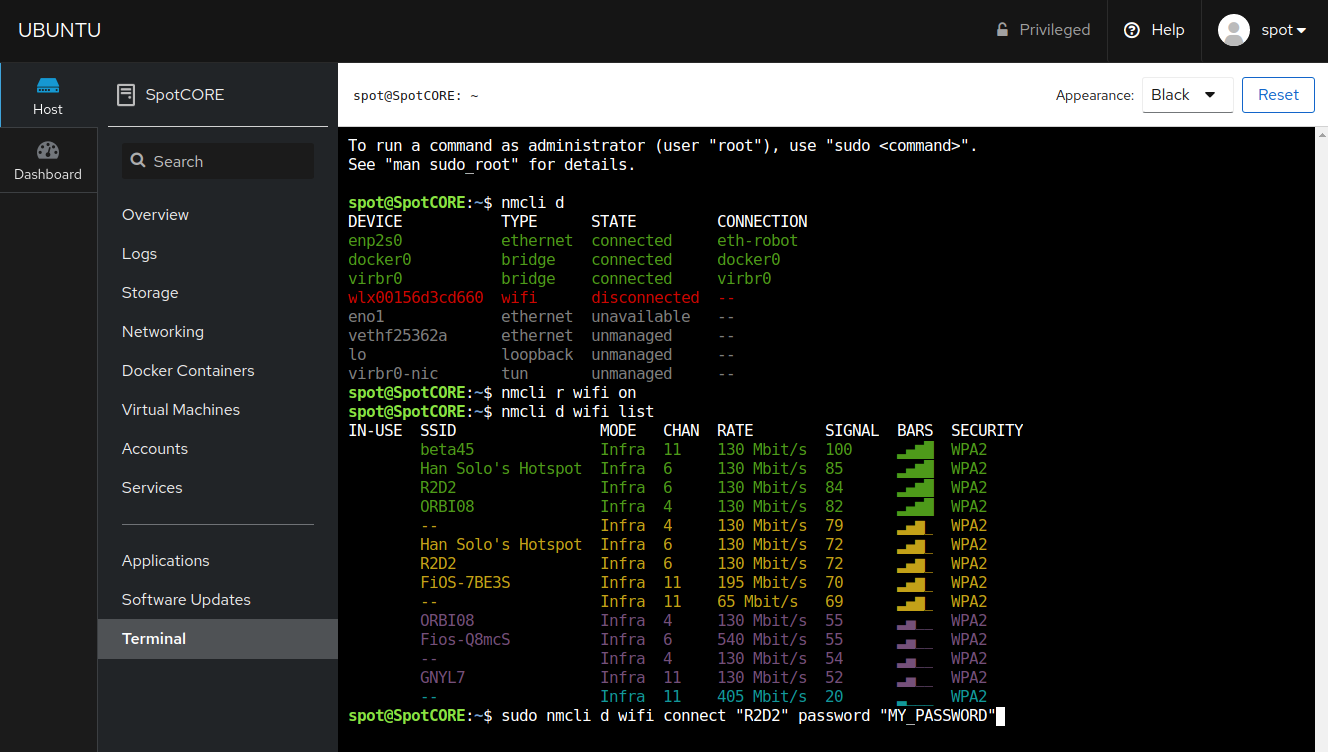 A succesful connection will appear as follows.

However, to test the internet connection, attempt a ping to google.com. Press Crtl + C to exit. 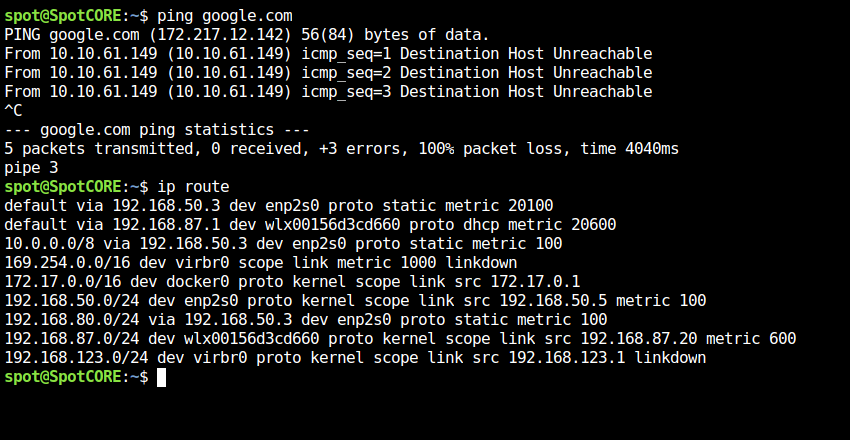 You will notice the ping requests do not go through. Destination Host Unreachable. Notice in the routing table after command ip route, Boston Dynamics has interface enp2s0 configured with a default gateway at the lowest metric in order to route all network traffic to the robot by default. 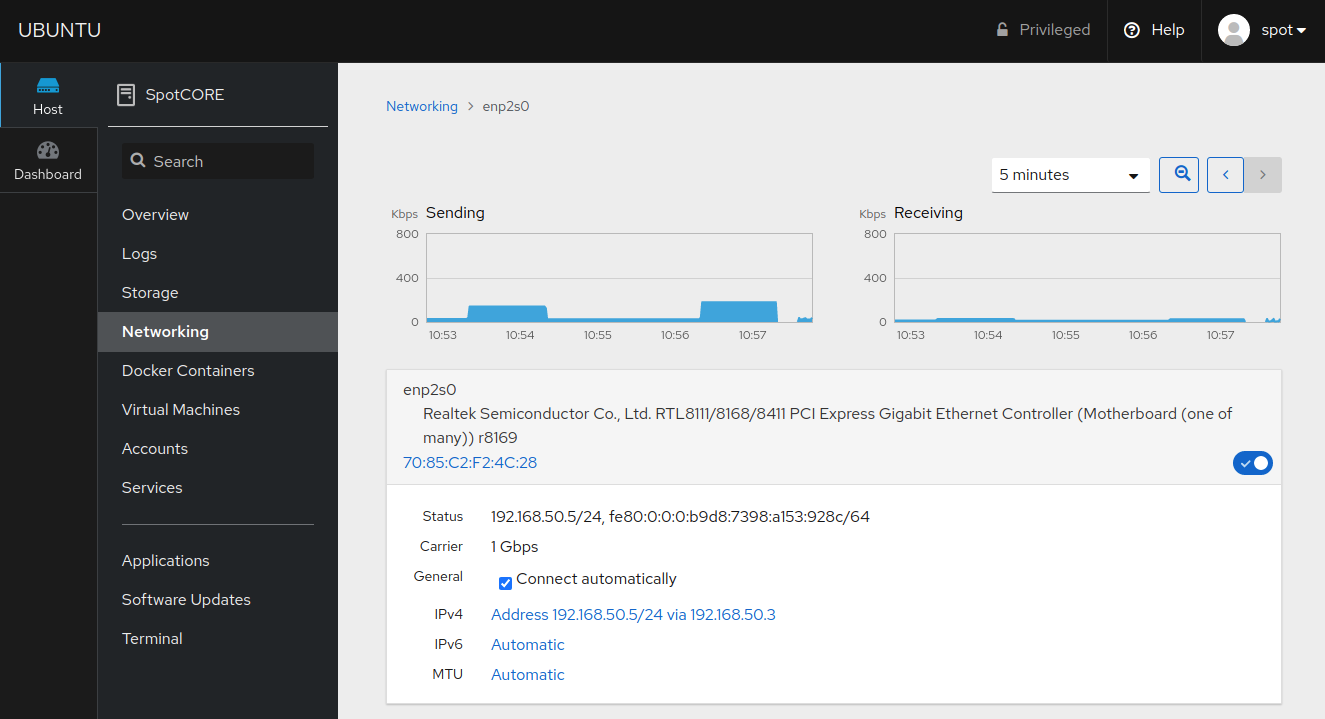 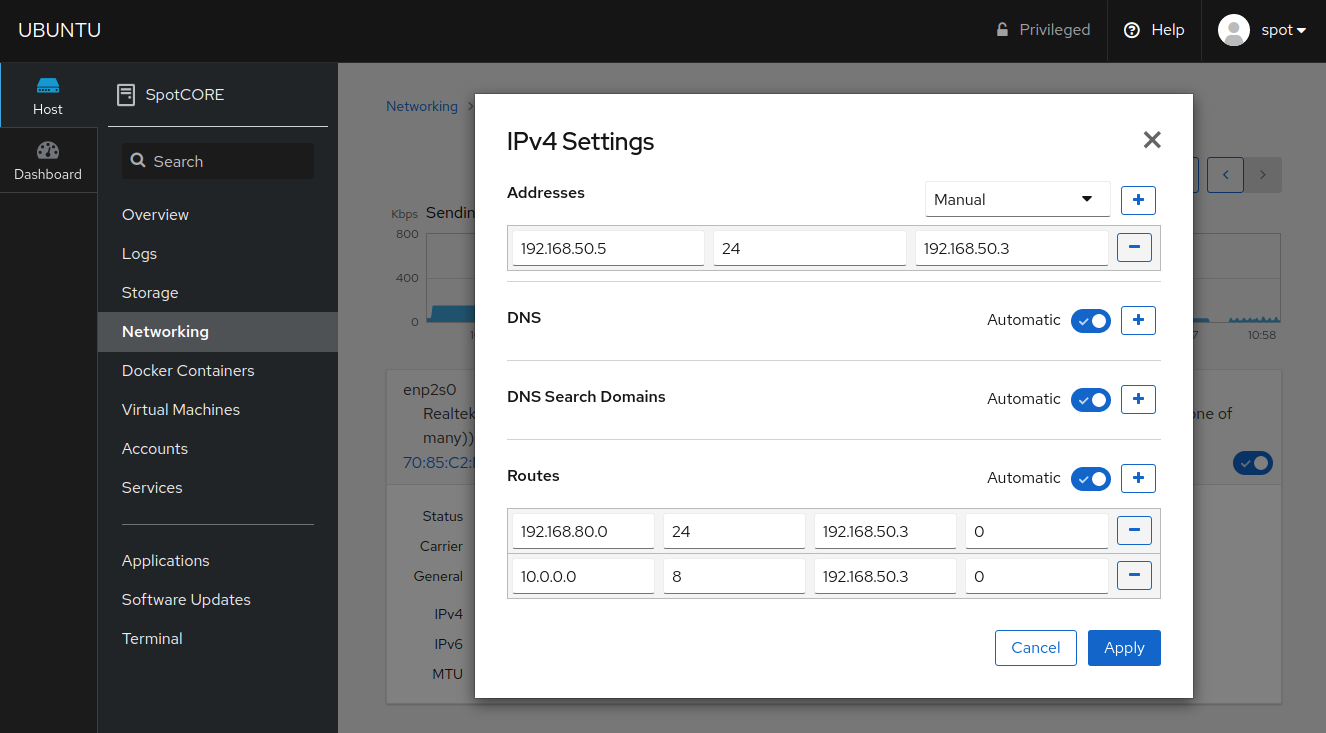 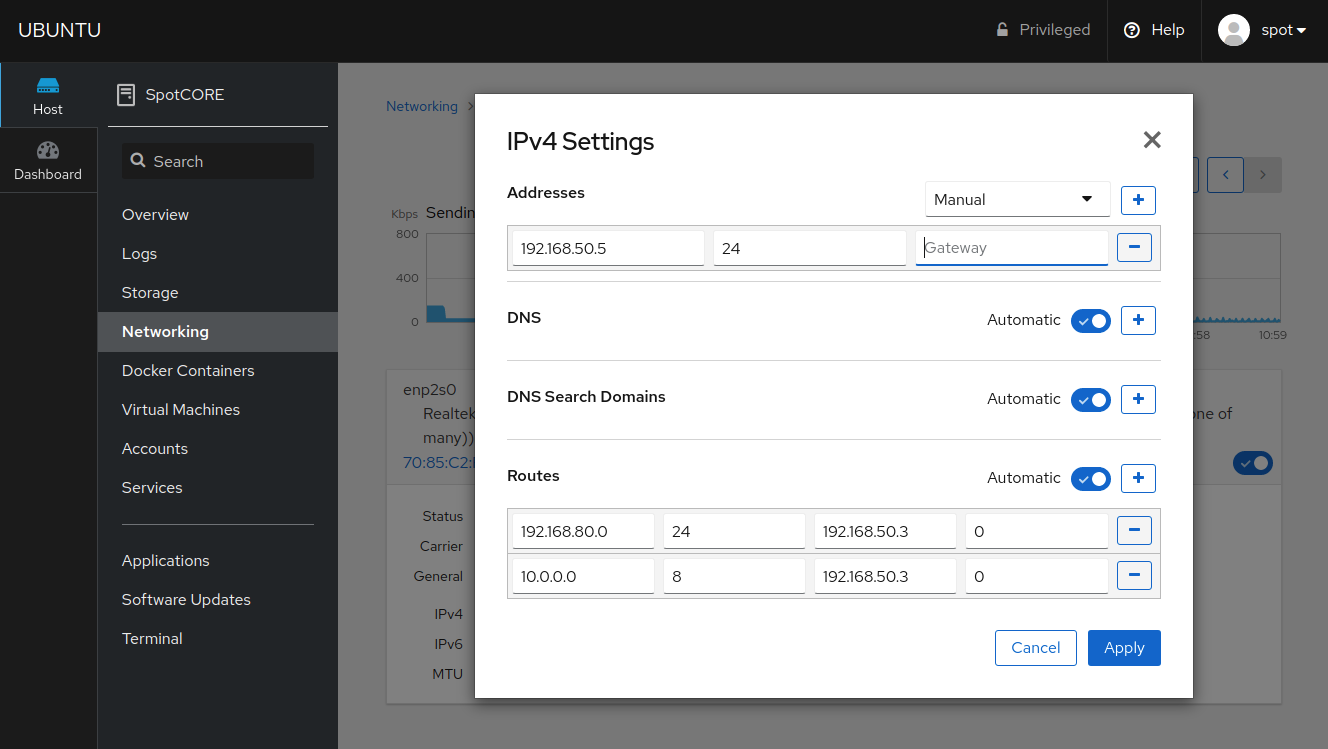 Without the gateway, attempt to ping google.com from the terminal again. Press Crtl + C to exit.

Ping requests work! The Spot CORE can now reach the internet. Notice in the routing table after command ip route, the only default route is the new WiFi adapter.

This is a minimal interface to manage docker containers running on the Spot CORE. Boston Dynamics recommends using Portainer for docker management instead with instructions available here. Unfortunately, the Cockpit Docker Containers application does not allow local docker image .tar uploads at this time. 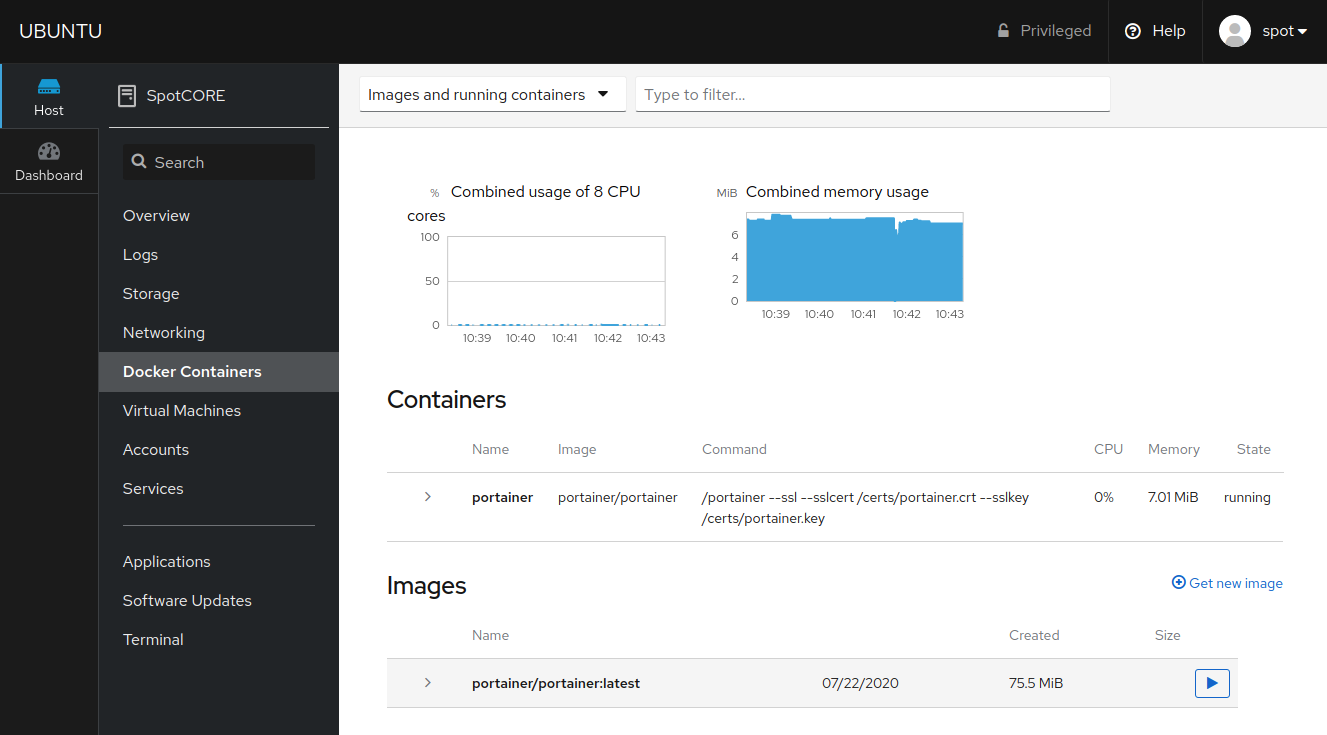 The Services and Logs pages are helpful. The Boston Dynamics velodyne_service runs by default on all Spot COREs. This service performs two mains tasks:

For customers who are running into Spot CORE LiDAR or Payload registration problems, please contact support@bostondynamics.com. To quickly diagnose this issue, support may ask to SSH into the Spot CORE and check the status of the velodyne_service and grab logs. This task is easily achievable with the Cockpit interface.

Type “velodyne_service” into the search bar near the top right. 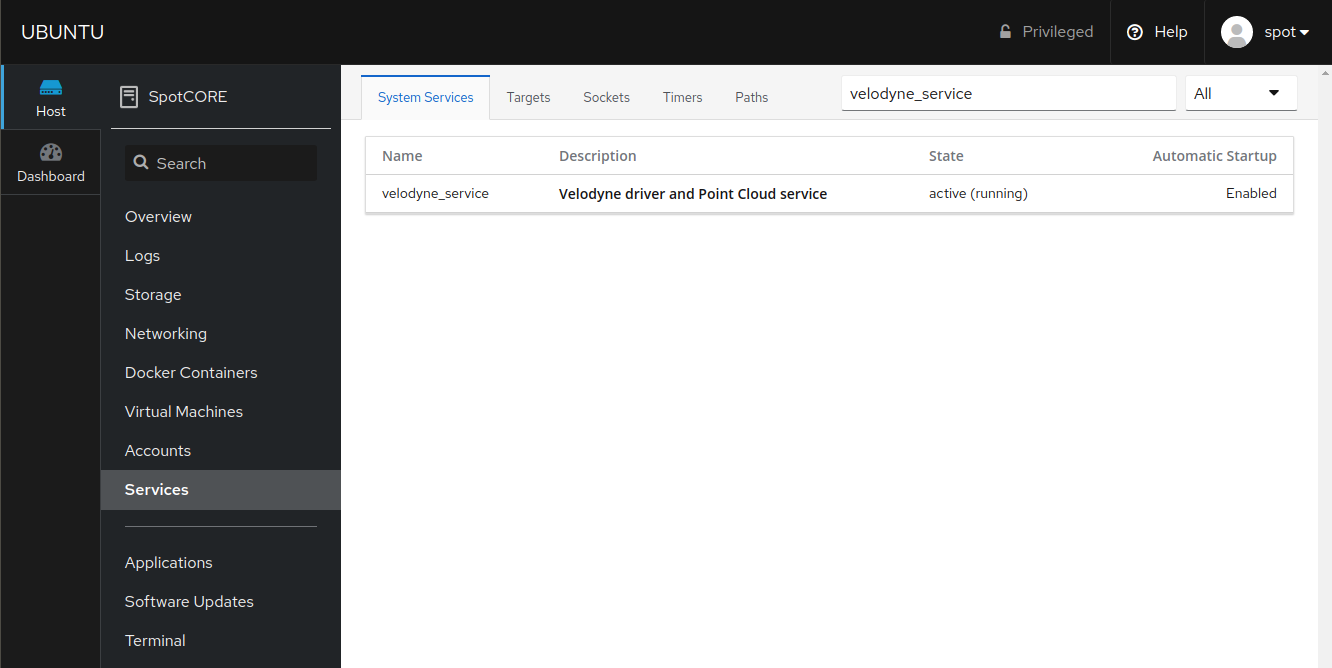 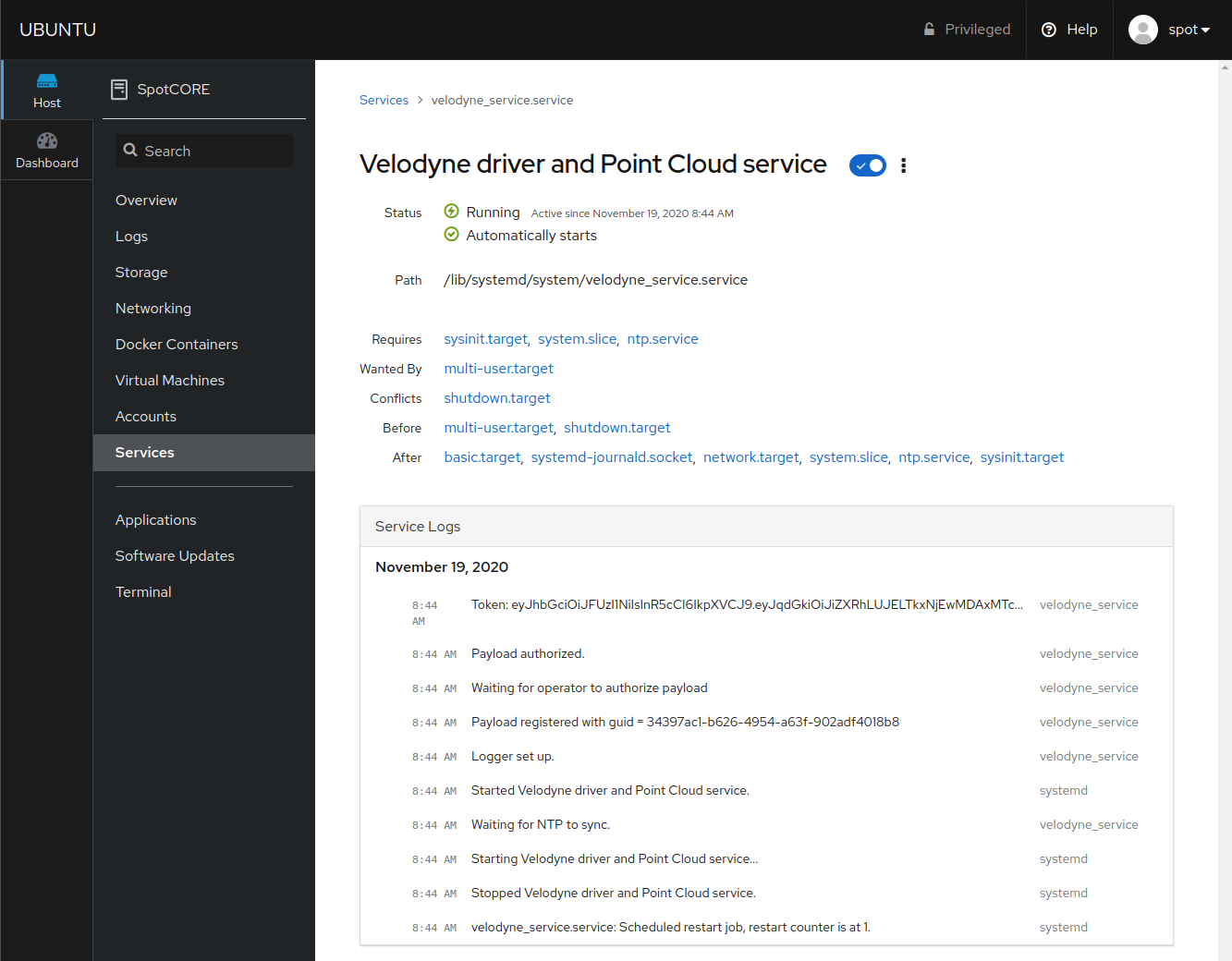 On this page, notice the service is properly running and registered. A similar search process can be performed on the Logs page for more detailed information.

Note you can still use the terminal to access system service status and logs.

Clicking ? Help in the top right corner of the Cockpit interface will lead you to documentation about the Web Console or the specific page itself.