The Spot Detect and Follow example collects images from the two front Spot cameras and performs object detection on a specified class. This detection uses Tensorflow via the tensorflow_object_detector from the Spot Tensorflow Detector example. It accepts any Tensorflow model, and it allows the user to specify a subset of detection classes included in the model. It performs this set of operations for a predefined number of iterations, blocking for a predefined amount of time between each iteration. The example then determines the location of the highest confidence detection of the specified class and walks towards the object. The walking has a built-in buffer of about 3 meters.

IF USING THIS EXAMPLE TO FOLLOW A PERSON, FOLLOW ALL SAFETY PROTOCOLS. KEEP AWAY FROM ALL STAIRCASES.

The program is organized as three sets of Python processes communicating with the Spot robot. The process diagram is shown below. The main process communicates with the Spot robot over GRPC and constantly receives images. These images are pushed into the RAW_IMAGES_QUEUE and read by the Tensorflow processes. Those processes detect objects in the images and pushes the location onto PROCESSED_BOXES_QUEUE. The main thread then determines the location of the object and issues commands to the robot to walk towards the object. 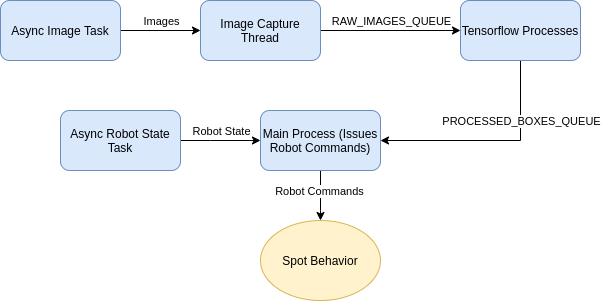 Installation (Only if you want to run without Docker)¶

To install this example on Ubuntu 18.04, follow these instructions:

Prior to running the example, you will need to acquire estop access from another source such as from a connected laptop or tablet. This allows you to to emergency stop the robot since this application does not have a GUI. This example follows the common pattern for expected arguments. It needs the common arguments used to configure the SDK and connect to a Spot:

On top of those arguments, it also needs the following arguments:

Please refer to this document for general instructions on how to run software applications on SpotCORE as docker containers.

This example provides a Dockerfile for running in a container. This requires installing Nvidia Docker. You can follow the instructions at https://github.com/NVIDIA/nvidia-docker to install Nvidia Docker. Nvidia Docker is preinstalled on the Spot CORE AI.

To build the image, you’ll need to first copy over the tensorflow detector file first:

To run a container:

As an example, the faster_rcnn_inception_v2_coco Tensorflow model pre-trained on COCO dataset can be obtained here. Run the example with --model-path pointing to the pb file in that model and with --detection-classes argument set to 1 to detect people in the camera images. That model is not supported on Windows or MacOS. The pre-trained models may not be good at detecting some classes when using the robot’s cameras, as the fisheye distortion, low resolution, and black and white images affect image quality. For example, pre-trained models may not perform well at detecting “sports balls” due to the lack of color. The ssd_mobilenet_v2_coco and faster_rcnn_inception_v2_coco have been tested to work well at detecting humans.